Essay | No one-size-fits-all models of success

When it comes to culture-led regeneration, there are no one-size-fits-all models of success

Today, culture-led regeneration is either an aspiration or established achievement of countless cities worldwide. From Glasgow to Liverpool, from Barcelona to Bilbao, from Lille to Marseilles, and from Baltimore to Detroit, cities are looking for – and finding – ways to transform their image nationally and internationally: from stagnating or forgotten sites of industry and commerce, to exciting cultural and creative centres.

In the 30 years since the first wave of culture-led regeneration initiatives, various cities have been held up successively as ‘models’ of how to kick-start and sustain culture-led regeneration. The ‘Bilbao effect’ narrative, prominent in the late 1990s, helped to popularise the belief that all you need is a ‘Guggenheim’, and your tourism industry will boom. The ‘Barcelona model’ went further – using a mega-event, the Olympics, as a catalyst not only for the transformation of the city into a major tourist destination but also for the re-engineering of its urban fabric. Liverpool was both pioneer and latecomer in this culture-led regeneration race – starting early by transforming its Albert Dock and opening a cultural flagship, Tate Liverpool, back in 1988. However, it was only with the European Capital of Culture accolade in 2008 that the city’s ‘cultural renaissance’ was widely recognised – and with it the emergence of what has subsequently been dubbed the ‘Liverpool model’. 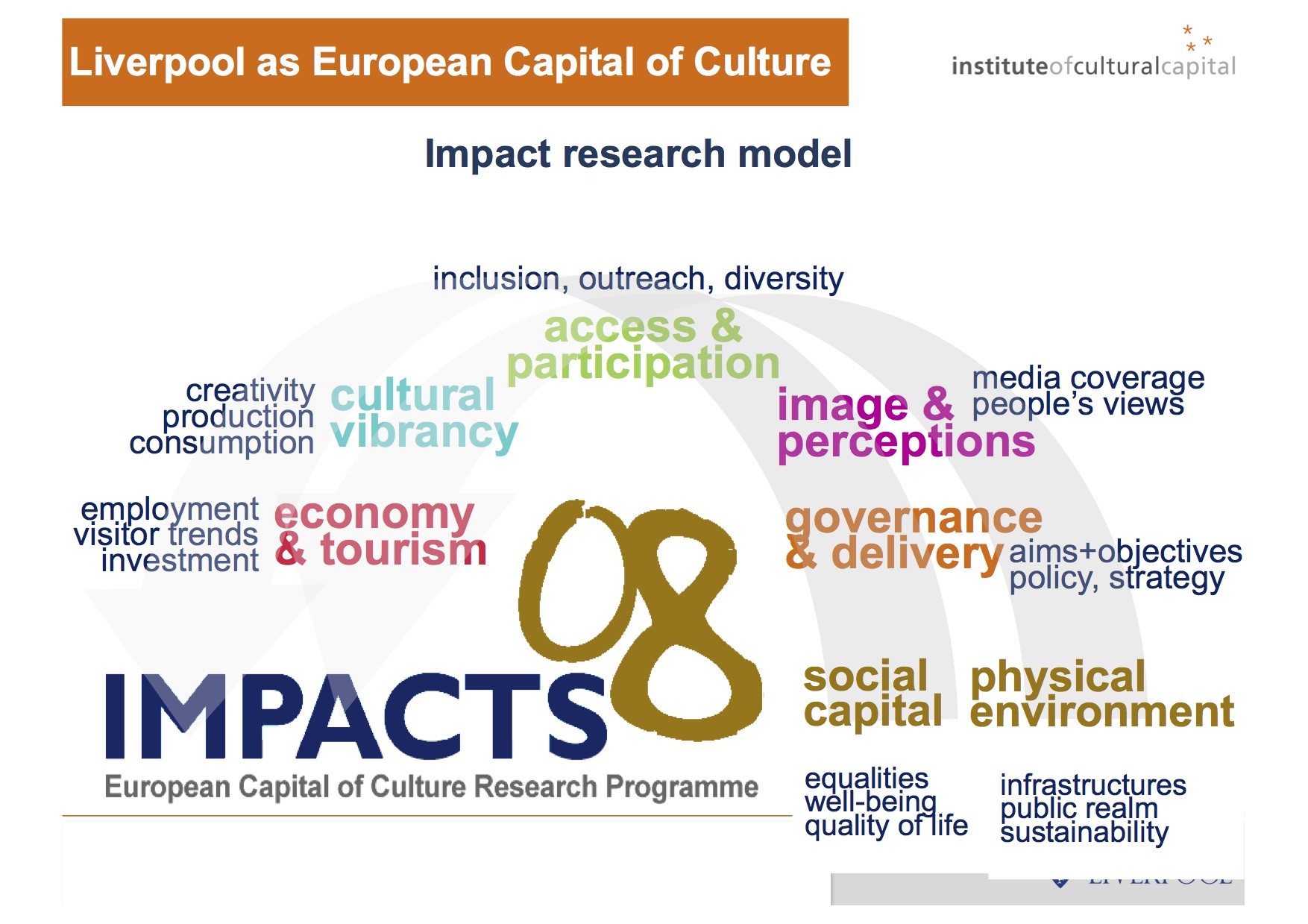 There are valuable lessons to learn from all these ‘model’ cities – including on the dangersof success. Yet, perhaps the most important lesson they offer, paradoxically, is that success comes in many shapes and forms; that there is, in fact, no single ‘model’ for success. The reason for this, simply, is that whilst post-industrial cities ripe for culture-led regeneration frequently share a number of features – most notably, as places of transition, transformation and risk-taking – they also, of course, possess qualities, strengths, people and histories that are completely unique. It can never be a case, therefore, of ‘cutting and pasting’ aspirations. The stories that are meaningful to Liverpool may have nothing to do with the stories Barcelona or Detroit want to tell – making it misguided, and indeed potentially damaging, for any city simply to mimic what others have done to ‘succeed’ and get on the investment and tourism map.

As Liverpool celebrates the tenth anniversary of its European Capital of Culture year, it has a chance to revisit its narrative of ‘success’ and reaffirm its status as paragon of culture-led regeneration. Yet, it also has a valuable opportunity to take pride in, and cherish, these unique features, which in Liverpool’s case include:

As outlined in the narrative behind its designation as UNESCO World Heritage city (Liverpool, Maritime Mercantile City), Liverpool was a world-leading innovation hub long before creative economies and culture-led regeneration became an explicit urban trend and aspiration. Its creative edges have thus been centuries, rather than decades, in the making. Future city leaders – and the strategies they devise – should not jeopardise this distinctive cultural topography by attempting to emulate other cities’ success models, but should instead feel confident enough to create their own.

Join us on the 18-19 October 2018 in Liverpool, for cutting-edge debate on 30 years of cities of culture, creative cities and culture-led regeneration experiences. We will explore these and other provocations, bringing Liverpool in conversation with other cities, big and small, from Porto to Los Angeles, from Hull to Helsinki and to Shanghai.