DEBATE | On the need for both ‘black’ and ‘white’ narratives around mega-event impacts.

We need to acknowledge both the black AND the white (plus some grey, also)

As academics, we have no choice but to jump onto the sound bite bandwagon if we want to remain relevant in the era of the 140 character statement. Punchy headlines and short articles (“800 words max, please”) have become important vehicles for scholars to shape the debate about important – and indeed complex – issues that one might feel are best left to the informed nuance of refereed journals and monographs. (Who has the time and will to read those, in small screens, on the go?).

On the morning after the Rio 2016 Closing Ceremony (Monday 7am – Brazil time) I decided to put forward a piece on the immediate to medium term cultural legacies of post Olympic Rio. I had been asked for 800 words, of course, but I delivered 1,600. The subsequent edits were dramatic. From headline to bottomline. A sharper piece. An easier to read piece. Probably, as well, an easier to misjudge piece. But I agreed to these changes. And a noticeable bunch of email, direct commentary and tweet reactions later, I have experienced the consequences.

The piece ran “Don’t believe the doom mongers”. In its edited form, it argues in favour of the many existing examples of positive urban change for Rio in the wake of the Olympics. It makes a point about the need to acknowledge that there are positive changes. The reason for such emphasis is not based on evidence (nor belief) that everything is rosy and wonderful in Rio – nor that the Games have been exclusively a force for good. It is rather an attempt to counter balance the dominant (academic and journalistic) narrative around everything that is wrong about Rio as an Olympic city – a call for some ‘white’ in the otherwise consistently ‘black’ take around the urban dimensions and consequences of these Games.

International commentators on the Rio Olympics have generally focused their attention on two areas: on the one hand, the staged events (ceremonies) and sport competitions, which, in line with tradition, have mainly been presented with the euphoria of the committed sports fan; on the other hand, commentary around organisational scandals and abuses against local communities. The latter is an important (and well documentend) side of the story that is common to all mega-event media narrative cycles – see reporting on Athens, Beijing and London – but that, in Rio, has been accentuated due to Brazil’s chaotic political climate and, understandably, due to the extreme urban tensions and unequal conditions in the city.

I have chosen to highlight what has gone right in Rio because we are witnessing some truly important opportunities for ‘transformation’ (the ‘go-to’ word in the official Games narrative). Transformation in Rio has been made possible despite the apparent chaos and deeply embedded tensions thanks to some (yes, some) good institutional planning and a lot of dedicated entrepreneurial – as well as socially conscious – individual initiative.

My own observations of Rio during the Games have convinced me that the Boulevard Olimpico is a major coup for the Olympic city that has changed (and will continue to change) the way residents relate to each other and their city. Rio’s ‘Centro’ has now an actual centre that reflects the best learning in public realm management. It has been immediately appropriated by the city at large thanks to the impetus provided by a ‘big party’ everyone wanted to be part of – after much scepticism and doubting. Now, of course the latter sentence is ‘journalistic’ rather than academic. Did absolutely ‘everyone’ want to be part of the party? Probably not (though four million – or even three, if you doubt the official line – is not a bad start). However, my claim that this area is a major cultural legacy of the Games and one of the best examples of sustainable transformation for Rio is not just a catch-phrase: detailed academic papers could (and will) be written about this and prove the elements that evidence good planning – and good timing.

After seventeen-years directly observing and documenting experiences in nine Olympic cities (plus the legacy in my hometown, Barcelona) I am totally confident about this observation and the significance for Rio to have achieved this: creating a new, shared space where very diverse communities (in a continuously divided city) feel safe, welcome and happy to spend their leisure time. 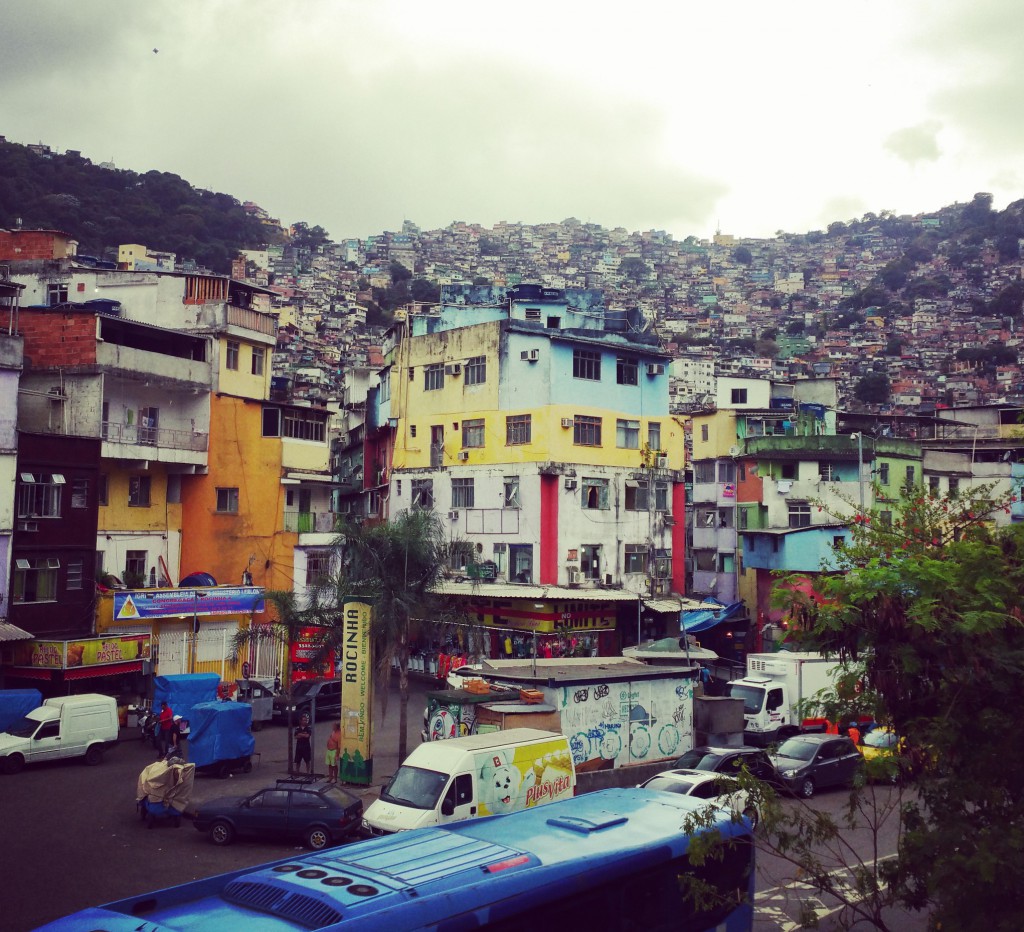 The commentary I offer on the benefits to favela life is not as deeply informed. I have not spent years in Rio’s favelas and I am not an expert in slum-living conditions, so of course I must exercise caution and have taken reactions to my piece seriously. Rio has been the first Olympic city where I have dedicated time and thinking to the particularities of such communities so as to understand whether Games-related legacies can trickle down beyond ‘formal’ (census-captured) neighbourhoods. I accept that I have had mixed views throughout my documentation process: the organisers told me that the Olympic education programme, Transforma, included all schools in Rio (favela schools too); that Games workforce opportunities were passed on to favela residents and special training programmes put in place to encourage applications; further, projects like Fight for Peace have targetted favelas especifically using the Games as an inspiration for community engagement. At the same time, it is apparent that there were many misunderstandings, that people felt excluded and not sufficiently visible in the Games’ central narrative. The cancellation of a large part of the official cultural programme (Celebra) also contributed to curtailing opportunities for direct participation and symbolic representation.

Despite all this, it is simply not true that the Games have only had negative effects on favela life. Forced evictions and the dark side of rushed pacification processes are important issues that have been extensively discussed. This discussion is the dominant background to favela-related Olympic city stories and includes well-informed and reflective pieces, as well as sensationalistic takes – with the latter particularly prominent in social media environments but also present in and amplified by many mainstream media. I have not found many pieces that embrace a discussion of both the negative and positive angles. It looks like we must take sides: black or white. 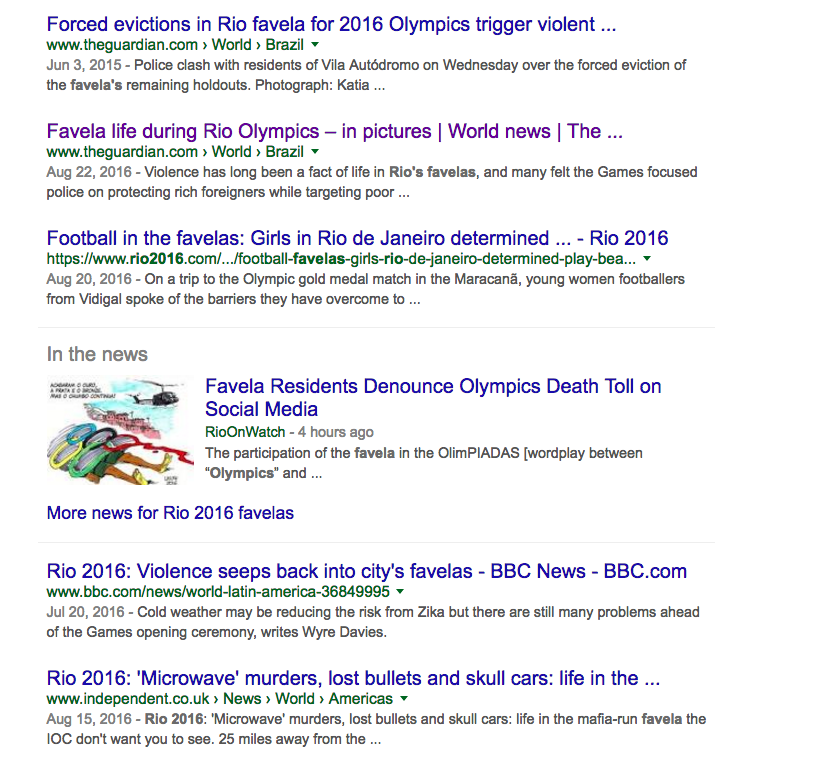 I have chosen to highlight the positive. And, one week on, with a bit of perspective, I accept that my angle may not have been precise enough. I accepted the catchy headline and the possibility to stir debate. But I was not clear enough on my actual purpose and concern: to bring a bit of ‘white’ to this ‘black’-dominated narrative so as to ensure we engage with less clearly-cut angles; and more than anything, to make a strong point about Rio as a complex and evolving city that has not just been a disaster zone ‘ravaged’ by the Olympic machinery. It is a city that, like Barcelona before it, was in need of a push to reconnect with its port spaces, needed to improve its public transport routes and needed to reclaim and rediscover public spaces, beyond the beach.

Porto Maravilhas, Parque Madureira and the fast-developing range of new arts community driven projects, new public transport links and extended facilities in a growing number of favelas are examples of improvement across Rio. The initiatives I mention in my article were pushed forward (and completed) thanks to the imperative for  ‘joint thinking’ that was imposed by the mega-event hosting process. Of course, there have also been many important fails (do I need to repeat that referring to achievements, completed and in development, does not deny that other projects have gone wrong?) 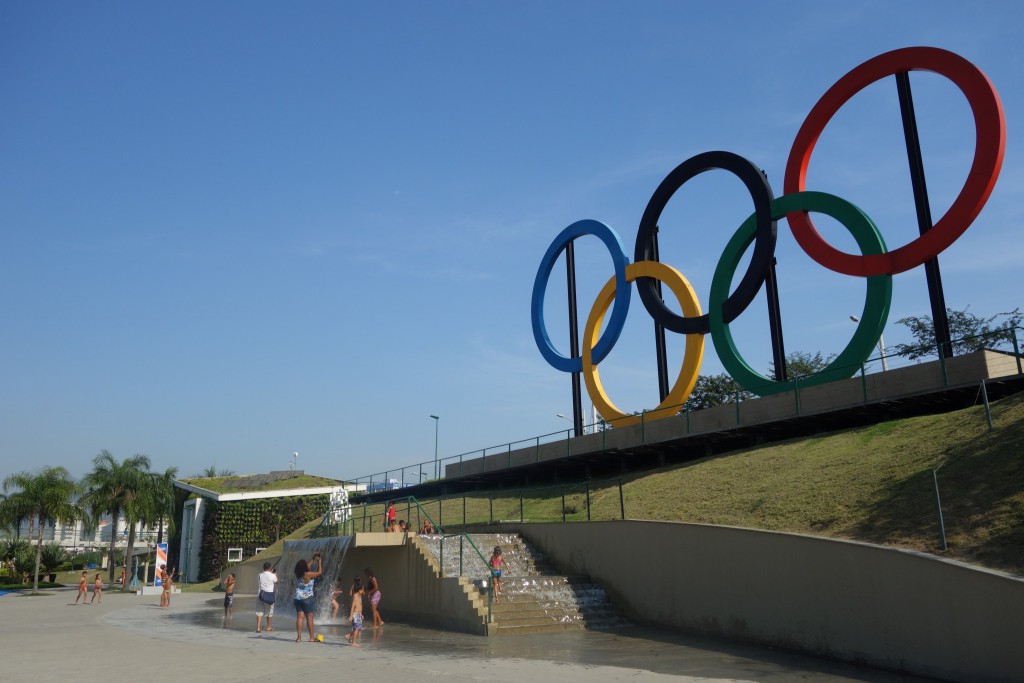 If we are happy to look at Barcelona 1992 as a good – or at least, decent – reference model for urban change, we need to embrace the possibility that Rio has done ‘some’ things right and that ‘some’ positive urban legacies will emerge and grow in the years to come. Barcelona also excluded some communities from its Games hosting process and its Vila Olimpica was riddled with problems. It had no favelas but it had La Mina. It was not all rosy in 1992. But (particularly, mainstream) commentators have been keen to focus on what worked well and Barcelona is hailed as one of the top examples of post-Olympic “success”. Why do we want to stereotype Rio as a failure?

Olympic-driven urban change poses challenges and opens opportunities. We seem to want ‘perfect’ examples of Olympic city success or failure. Rio is being targeted as an example of everything that is wrong. But I have seen a lot that is right – and as an academic, as well as a commentator, I believe it is essential to raise the debate and recognise both the black and white dimensions in this rapidly evolving post-Olympic city narrative.

My edited story is published here

The extended version of the original is here

Other stories about my research on Rio 2016 are here

← PROJECT | What counts as #OlympicArt during the Rio 2016 Olympics?
‘If everyone says so …’ Press narratives and image change in major event host cities →